2 IN THE CHEST Cd Release Party for Lead Jacket in a Pine Box. March 2nd 2019 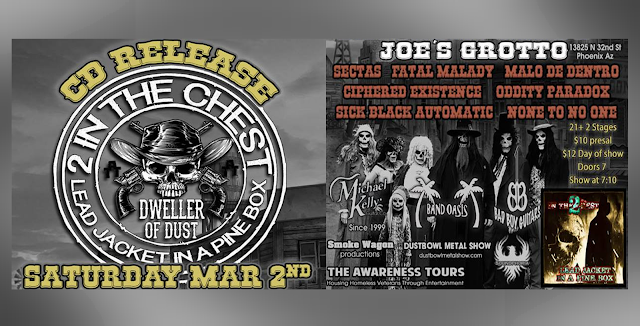 Comments about the 2 IN THE CHEST CD Release Event:

Hey, hey, hey, I have been to a ton of shows in this valley for going on 32 years. I have played in bands off and on since 1988. SACRIFICIAL DEATH, SCAPEGOAT, DOC MARTINEZ AND THE MOODY GROOVE AND CRANK BAIT. 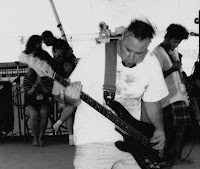 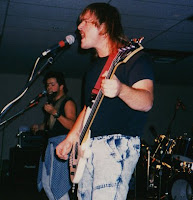 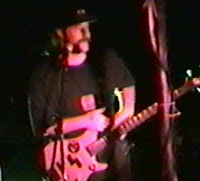 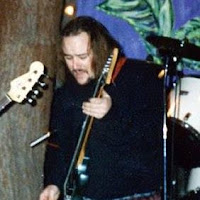 We have performed in front of very large crowds and we have many times played for the bar staff. But each and every time we give 110% on that stage to the point of damn near passing out. 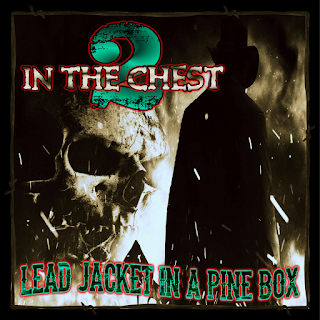 In April 2018 2 IN THE CHEST walked into Steampunk audio labs in north phoenix, and began recording the second full length album
with Mr. Casey Weaver at the helm. We worked on this record for almost an entire year making sure that this CD would surpass the first one, not only as the music is concerned but also the release party.

In 2016 we released Iron Smoke and Spit and that record was awesome but the release party left us questioning our ability to give quality music to each one of you that listen to it. But we stepped back and realized that this scene, this amazing Arizona Hard Rock and Metal scene want’s something very explosive. So  we went to work on the brand new record LeadJacket in a Pine Box in search of amazing stories to tell each one of you that love  2 IN THE CHEST so much. We busted our tails on each and every measure of each and every song making sure that every element was as impactful as the last. We drilled into those songs day in and day out. We kept railing into those songs for 4 months making them as powerful as we could. We were finally happy with the stories.

I then called Billy Gonzales with “We Steal Copper” 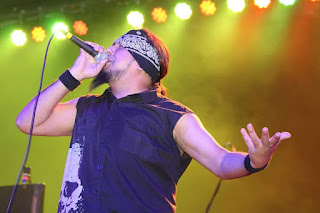 and SMASH ENTERTAINMENT and asked him to put together a killer line up of bands for the Album release event. He asked me to give him a list of bands and that list consisted of well more than we could put on one show even with 2 stages. The venue of choice for this release was the amazing Joe’s Grotto.

A couple months went by and Billy sent me a message with the bands that were very happy to join this event. Each one of these bands including the brand new debut band “NoneTo No One”. 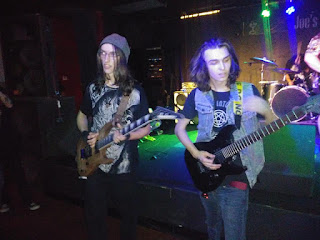 When we arrived to the venue about 5:30pm there were already 20 people there by 6:30 there were 50 by 7:00 when None To No One started performing there were well over 65 people in that building. And half way through there set there were close to 100. When SICK BLACK AUTOMATIC 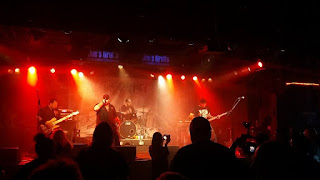 hit the stage giving to the attendees a powerful metal set there were people everywhere. 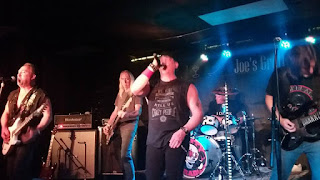 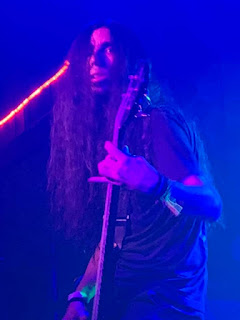 hit the stage tearing it up song after song. Then it was SECTAS. 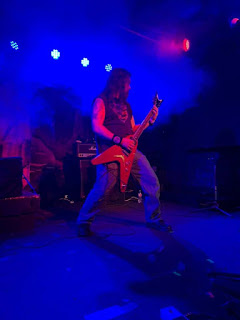 They hammered out a killer bank of tunes like they always do. By this time you could hardly work your way through all the people. Then the mesmerizing CIPHERED EXISTENCE 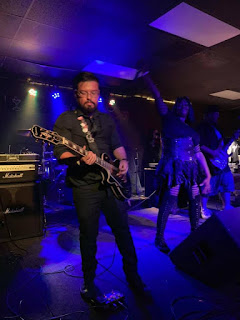 hit the stage as SECTAS was tearing down and 2 IN THE CHEST was setting up. I was watching them as we were getting ready to give what we hoped to be an unforgettable performance.

I looked down at the program I build for over 2 weeks and made sure everything was ready to go. While we were out back becoming THE UNDEAD I kept going through the planned program over and over in my head. People were talking to me outside and I did not even hear them because my focus was to deliver the best show Arizona has ever seen. Whether we achieved that mark or not, we may never know, but I am beyond confident that we gave every bit of our souls to that performance.
Most of you do not know what happened because you were inside the building but when the intro to the set started, it was setting off car alarms all around the building. At that point we knew that this performance would be remembered by many people for years to come.

When Velvet and I were writing The Title track to this new album “Lead Jacket in a Pine Box”, it seemed as if something was missing in the song. It sounded great but there was one very important detail that came to me after attending a concert with Sounds Like Murder. Durdy Jones 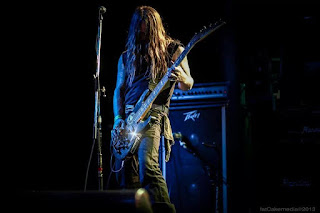 was doing this amazing monk vocal in one of his songs and it came me. “thats it; that’s what this song needs. I called up Durdy and asked him to come to the studio and lay down vocals on that song and when he was done; the song was complete. When he said he would be there to do the vocal live for the CD release I was so damn exited. 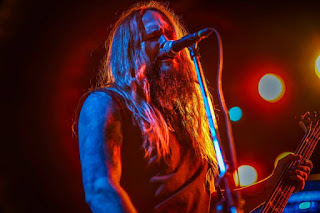 running down my spine. No one could see me, and I am not afraid to admit it, but I had tears of joy in my eyes by the end of that song.

Then we gave each one of you awesome people a song off of our last record called mama cried and I asked over 260 people to give my friend who lost his life in February, Justin Blum a moment of silence and when I did; the 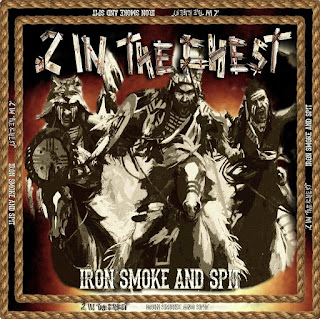 respect I was given was unexplainable. Thank you all for helping me memorializes a great friend, thank you from the bottom of my heart.

Then I introduced Mary Ella O Sullivan as playing the drums on Fury Lucy. You all gave her sooo damn much love that again tears were falling from my cheeks under that mask. I stepped back out of the way so that everyone could see her 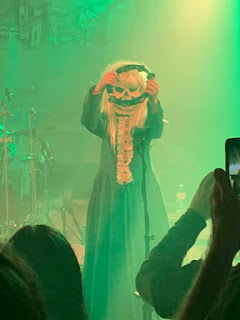 perform that song. We are so beyond proud of how well she did. The screams were so loud we could hardly hear our instruments.  We just want to, as a band, thank each and every one of you amazing people for choosing to come to this show out of all the other entertainment in the valley. Thank you so much.

When we left the stage, I was so over whelmed with the love that all of you gave to us that I really needed to sit down and take it all in. I personally have never in all my years seen a show filled with local acts congregate in such large numbers. When the stage spot lights went on we seen people shoulder to shoulder all the way back to the
BEST CLOTHING CO. table. Where an amazing band was getting ready to play. MALO DE DENTRO. they brought an explosive performance on that stage, bringing up "Christian Lee" from SECTAS, and Tulin Howey from EMPIRE OF DEZIRE to perform a few numbers with them. What great bands were on this bill. Talk about love. I don’t think I could have asked for a better line up of bands on this night. 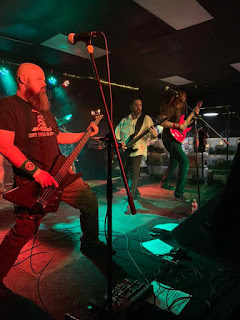 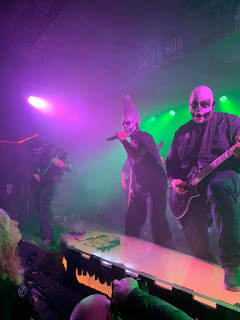 Then it happened, the last act of the night, handpicked by Mary Ella O Sullivan herself, “FATAL MALADY” her favorite band in Arizona hit that stage and brought the brutality only they can bring. Mary Ella was Brought on stage by the singer of Fatal Malady, and he praised her for being such a great little person in front of all of you, and you again showed her so much love. 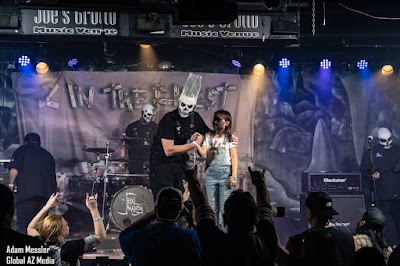 2 IN THE CHEST if you did not know, is a family band. Mother Father Daughter Grandfather Grand Mother and someone that is very special to us on the bass guitar. And we cannot forget The Awesome hostess who comes out to each and every show to dance with us on stage.

If I were to call it quits and not play another show ever again. This would be the show I would end it all with. We have never received so much love and attention than we did on March 2nd at Joe’s Grotto. And we will never forget it.

People that we want to thank are so many that it scares me to even try and name them all for fear I may forget someone. But thank you to BAD BOY GUITARS 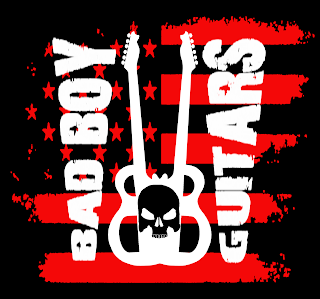 for taking me in to your family. That is the coolest thing that has ever happened to me. Joe Grotto… you my brother are an Icon in this music scene and you gave us a chance to play your venue many years ago and we will never forget it. We hope to play this venue many more times. Joe we love you very much. Thank you for allowing us to have our CD Release at your venue.

Other amazing people we have to thank are Jamesons son for coming all the way to Arizona from Ohio to see this event. Pat From St. Madness 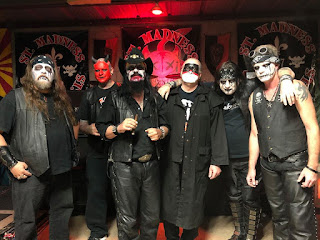 for gracing us with his presents. That meant so much to me to see this Arizona metal icon at our Cd release. Theresa Lamb for coming all the way from Tucson to see this event, John and Dylan from Black Wolf Mountain. 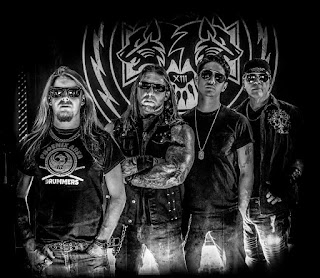 Jeff, all the photographers that showed up for this event, Erik I love you to bro. So many members, from so many local bands that I do not remember their names, but thank you for coming to this show. It meant so much to all of us. I want to thank the guys at BEST Clothing Company 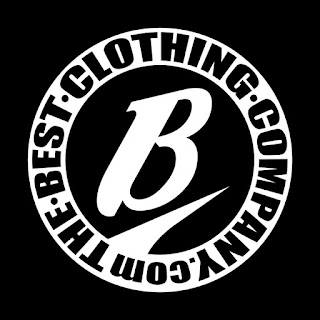 for coming to this event. There were so many amazing people that I will never forget this show.

Message to all the bands that jumped on this show:

Each member of 2 IN THE CHEST would like to thank you from the bottom of our hearts. You all just brought you’re A games, and this night will go into the record books as one of the best local shows we have ever done. THANK YOU! To each Dweller of dust that has stuck in with us from day one, ohh soo many years ago. We love each and every one of you. THANK YOU!

Next performance Anne Fest May 3rd ClubRed in Mesa, Arizona
Peace Love & 2 IN THE CHEST