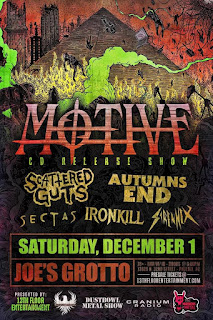 There are many, many great metal bands in Arizona to many to list, but there are those that when on stage deliver an excruciating display of metal power. And on December 1st I witnessed one of those bands. I have written about bands in Arizona for over 5 years. But there are those that stand out with such power and impact that they to put it bluntly impress the hell out of me. 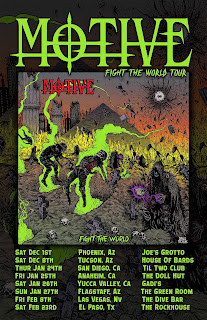 When I go to a show I want only 2 things from the performer’s.1.  Great music, and 2, the visual delivery of that music. Tonight was no exception. Steve the guitar player from Motive sent me a message offering me a place on their list with all the work I am doing for The Awareness Tours I do not have much time these days, but I have been waiting for these guys to release new music for years so I was not about to miss this monumental event.
Leaving my house I always bring a thumb drive so I can rehearse the new  2 IN THE CHEST  music any chance I get so this is what I did on the way to Joe’s Grotto. I arrived and sure enough I was on the list. Thank you Motive for doing this. I was greeted at the door by local guitarist Matthew Miller he was in a band called Deathgrip that I really enjoyed they of course are no longer together sad story. But he went on to combine forces with Gavin D. and Tommy G to for a new band called Untether and although I have not heard any new music from these guys I am sure it will be great.
So when I walked in the amazing Sectas was loading their gear on stage and if you’re from Arizona and don’t know this band you definitely don’t get out much that’s for sure. Christian is someone I call friend and brother. He is the singer guitar player in this 3 piece powerhouse band and they pulled off a killer show as always. I am always amazed at Christians finger work on the guitar he is one of the best lead player around in my opinion.  He has a few lead tracks on 2 IN THE CHEST’s Iron Smoke and Spit CD.
Next up was another powerful local metal band. Autumns End. These guys do not need an introduction at all they always deliver a powerful experience from any stage they perform on.
But tonight my focus was on the guys in MOTIVE. This was a moment I have been waiting for, for a very long time. And it was finally here. I always do what I can to support the local scene by buying some of their merch. I attempted to do that this time but like most bands they do not order 4 and 5 X shirts for us big boys. But I was told that they would be ordering me one and I anxiously await that day.

When these guys hit the stage I was chomping at the bit so to speak to hear the new sounds of the almighty MOTIVE. And when that first note hit, I was immediately hooked. By the end of their first song most of the people that were out on the smoking patio were right there front and center. They were now commanding a pretty large size crowd and all eyes were on this band. Screams irrupted after each song was finished, and it seemed it was to the amazement of the band themselves. They were as surprised as we were, or at least it seemed that way. Right about the 6th song or so I marched my ass to the merch table to buy a CD. Now mind you I already have their new music they sent it to me to spin on the radio show, but I just had to hear this music again ASAP. 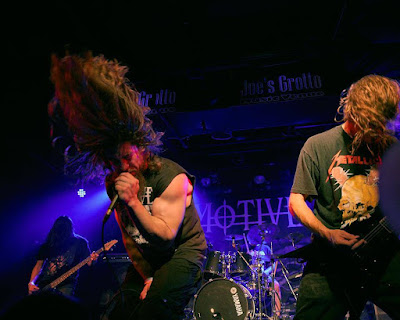 MOTIVE was blazing full force through each song on the brand new record, and with each song brought a bigger crowd and louder screams. MOTIVE has reached a new height in the local Arizona metal scene on this night with their new CD. Each and every song delivers explosive enjoyment.

If you remember when I started this review, I said I always listen to 2 IN THE CHEST’s new music whenever I am driving. Well this is the first time I have pulled the thumb drive and popped in a CD in a very long time. All the way home and all the way to and from work Sunday these songs were blasted through my audio system. MOTIVE has just entered my personal top ten for best metal bands in Arizona. This list is an Elite list, and you have to impress the hell out of me live to get on this list. Welcome MOTIVE to The Reverend Black Jack McBride’s top 10 Best Arizona metal bands.

This coming Saturday I will also be at Joe's Grotto for the final performance of another band in my top 10 THROW –LOGIC- . There will be a ton of bands I have not had the chance to see perform live before so this will be a great event.