DUST BOWL METAL SHOW
Local hard rock metal review
February 3rd 2018
I do not get out to too many local shows these days as I was forced to get a full time job that scheduled me on weekends. This is why I am constantly looking for content writers, people that go to local shows and do a review of the performance of the local bands. I started to do that a few years ago getting the opinions of the attendees and looking at the professionalism of the bands and members of those bands. 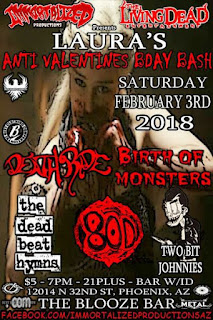 I feel it’s is important to give constructive criticism to our awesome scene because this makes you work harder to become the best you can be. All to many times I go to shows and bands are performing that should not be performing yet. They should be in the rehearsal room banging their live show out practicing their music and delivery of that music a hell of a lot more.
Because I have a job on the weekends I have been unable to give these reviews, but Saturday February 3rd was a day I had to take off of work as well as a few day prior do to my mother passing away. So I decided to attend a couple venues this night to take in some of the locals once again.
First stop was the blooze bar to see the immortalized production show anti-valentines birthday bash. With 80D, Birth of Monsters, DeathRide, the dead beat hymns, and Two Bit Johnnies. I arrived in time to catch the 1st band Two Bit Johnnies. This band or at least 2 of the members seemed seasoned in their craft as I figured one of them was new to the band and it showed. Their music was very cool a bit rough and undefined but never the less very, very cool. I was very entertained by this band. A few more months in the rehearsal studio and this band will be on point.
It was time to leave the blooze and get out to the CD release show for Sick Black Automatic at Joe’s Grotto. Bands on this bill were  Riot/Gear, Dierdre, Rocket 211, and Guardians and of course Sick Black Automatic. 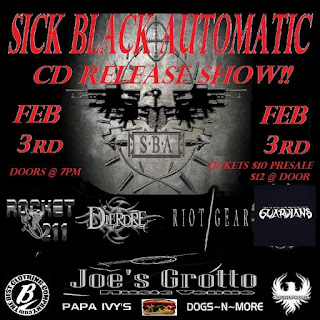 When I arrived at Joe’s Grotto Dierdre was on stage. My first thought when walking in after being greeted by a ton of awesome love from several people, WOW! I have never had the opportunity to see this band perform and damn they were incredible. Another bad ass female fronted band. I immediately went over to the merch booth and gave them my card and asked them to send me some music so I could spin it on the show. I sure hope they do just that. I went outside on the smoking patio and talk about the love I have never given out so many handshakes and hugs from so many people. This scene like I always say is the best most loving scene anywhere in the US or anywhere for that matter.
When outside talking with the people I seen on the big screen that SBA was setting up the stage for their CD release performance. As soon as they hit the stage, and I don’t see this to very often most of the people on that patio went inside to take in what SBA had to offer.
Now mind you I have seen SBA several times and they kick ass every time But this time was a bit different there was a very explosive energy in this room that night and excitement for one of our local metal bands that you don’t see all too often. After the custom guitar builders Bad Boy Guitars gave Terry Babicz a brand new guitar and welcomed him to the Bad Boy Guitar family he strapped that guitar on and the SBA slayers got to work. This performance was by far the best performance they have ever done and I was right there in front of the stage cheering them on screaming as loud as I could support this amazing band. SBA you guys have come a long way in a short time and that did not come easy your dedication to your craft showed on this night. You guys get 2 full metal horns \m/ (“) \m/ awesome job guys keep it brutal and thank you for being part of the best hard rock metal scene right here in Arizona.
There was one more band to hit the stage but I had to rush back to the Blooze to see for the first time 80D and man I am glad I did. I have been trying to see these guys for a very long time and this was the night and because they were the last band to perform the drummer was freaking wasted and being as messed up as this guy was he knocked out a damn good set. these guys have been around for a long damn time and there music and deliver of that music shows. 80D is now entered into the list of favorites on the Dust Bowl Metal Show. Now they just need to get me some of that awesome music so I can spin it on the show. 80D you guys were freaking amazing and to close the night out with you was a treat after taking in an incredibly explosive performance from Sick Black Automatic I did not think I could handle any more badassery but you guys brought that shit. Awesome show and I hope to see you again really soon.
I would like to thank all the hard rock and metal bands in this incredible scene for always showing me so much love. You guys are the best.